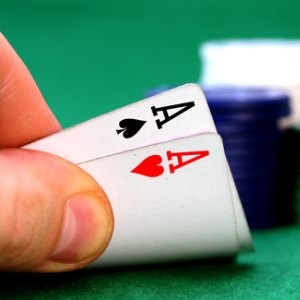 The situation dictates how they are played
Volume II of the Winning Poker Tournaments One Hand at a Time series by Eric “Rizen” Lynch, Jon “PearlJammer” Turner, and Jon “Apestyles” Van Fleet was recently released. In this book, each author chose one tournament, and discussed the key hands from once he made the money all the way down to heads-up play. For this column, I decided to choose some hands from Lynch’s analysis that look at different situations for playing small or medium pocket pairs.

Note that all of the hands are roughly the same, small or medium pocket pairs, but the situation changes the action significantly. In one hand, Rizen folds 7-7, and in the next, he discusses the possibility of four-betting with 6-6!

800-1,600 Blinds, 200 Ante
Setup: We are now down to three tables, and this is the second hand at my new table. The only player with whom I am familiar is Seat 5, a well-known European who has a very aggressive style. This table has significantly more short stacks than my previous one, with Seats 3, 6, 7, and 9 all being very short. I’ll be watching the table to see how they react. They all have at least 10 big blinds. With stacks of this size, many players will start open-pushing a greater range of hands. The table may consolidate fairly quickly, or it may present opportunities to steal if they all play too close to the vest.

: Small or medium pocket pairs are really tricky hands to play with my stack size and position. I lack a sufficient amount of chips to be able to resteal effectively, and pocket treys isn’t really ahead of anything. If the action is folded to me, I could make a case for going all in, as there is 4,200 in the middle and 24,823 in my stack. That represents nearly a 17 percent increase to my stack if everyone folds. If I had more knowledge of how the shorter stacks play (for example, are they folding too often?), this would be an easier push.

Since it’s my second hand here, however, I should get a lot of credit from the table. Annette Obrestad, 2008 World Series of Poker Europe winner, once told me that your first push (referring to both open-pushes and resteals) should be with garbage, as your opponents will usually give you too much credit, and subsequent pushes should be more selective, as opponents begin to doubt you more and more with each push. I agree with her — although it’s no fun when your first push runs into aces! In this case, though, Seat 9 raises to 4,800, and with very little resteal fold equity, I am forced to fold. The button is the only caller, and they take a flop.

: This is a very benign flop. Seat 9 checks, and the button bets 7,200. Seat 9 check-raises all in to 19,266, and the button folds. I note that Seat 9 is capable of check-raising all in rather than making a continuation-bet. Without a showdown, we don’t know his holding, but it could be anything from an overpair to a big ace (A-K, A-Q) to something like the K

. The important information to glean from this hand is that if this player checks to me in a situation where most players might continuation-bet, especially with a stack that he can believably check-raise all in, I should not automatically bet.

: 7-7 is a strong hand, although tricky to play from early position with only 25 big blinds. Seat 6, a very passive player who overvalues pairs, makes a standard raise for him to 18,000. I would consider playing this pot from a later position, knowing that he could easily have a lower pair or overcards. Since he is opening from under the gun, though, I am in a precarious position. If I flat-call, I will be calling off more than 10 percent of my stack. If several more players call behind me, I increase my chances of winning a big pot, but have very little chance of winning without flopping a set. Worse yet, if there’s a reraise behind me, I’ll almost certainly have to fold.

Given the aggressive nature of some of the players yet to act behind me, this is an important consideration. In addition, there are some short stacks behind me whom I’d have to call due to pot odds if they three-bet all in and Seat 6 folded. I’d rather not be put in that situation. I fold, and the action is folded around to the small blind, who cold-calls 15,000 more. The big blind folds, and two players see the flop.

6,000-12,000 Blinds, 1,500 Ante
Setup: Seat 4 and I are taking turns stealing from the shorter stacks. With the recent blinds increase, the short stacks are going to get desperate fairly soon, so I expect the chips to start flying around a bit more.

: Any pair is a big hand when four-handed. Low pairs are pretty tough to play deep-stacked against Seat 4, but being in position helps. Seat 7 folds. I raise to 28,888. Should Seat 4 three-bet me, I will strongly consider four-betting him, because I think he’ll be three-betting much lighter than normal, given the current tournament and stack dynamics. However, before he gets the chance, Seat 3 goes all in. Seat 3 is short enough that a call is automatic. I call 129,142 more into a 204,918 pot. Seat 3 shows the K

, for a race. The board runs out A

, and my pocket sixes hold up.

It is worth noting that even though I feel this call is obvious with pocket sixes, if I call and lose, it will drastically alter the table and stack dynamics, and put me in a position where I have to play far more defensively. On the other hand, if I win, it becomes a three-handed contest, with me being the chip leader.

Stack Size is Everything in Tournaments

Are Satellite Tournaments a Good or Bad Value?

Playing Against the Blinds in Pot-Limit Omaha