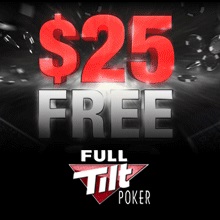 Restealing is important
I recently won the Full Tilt Poker $750,000-guaranteed event under the moniker “IonlyplayAA.” My win earned me a little more than $132,000, as I weeded through more than 3,500 players. This tournament has been good to me this year, as I’ve had three top-100 finishes, two final tables, and now this big win.

There is no question that working on my latest book project with Eric “Rizen” Lynch, Jon ‘Pearljammer” Turner, and Jon “Apestyles” Van Fleet has helped to boost my game. One thing that I’ve learned from these guys is that I need to incorporate more resteals into my game.

Some of the ideal conditions for attempting resteals with weak hands include:

The value of the pot will add significant value to your stack. There are situations in which you can add 50 percent to your stack while still having fold equity.

Of course, it is difficult to find situations that meet all of these conditions. With a short stack, you sometimes need to take calculated risks even though you might be risking your tournament life.

Here are five hands from my road to victory. Some of my decisions are debatable, as all of the conditions above weren’t met, but they all significantly increased my stack at key times during the tournament.

Hand No. 246
The blinds were 400-800 with 100 antes. I had about 12,000 in chips and was sitting in the hijack position. The player immediately to my right opened for 2,222. Successfully stealing this pot would add about 33 percent to my stack. Note that even without a hand, if I pushed all in and was successful in stealing the pot 75 percent of the time, I would break even from a chip perspective. This particular opponent was raising slightly on the loose side. I was holding 9-8, which is a relatively decent hand to play if I was called, as both of my cards would have been live against hands like A-K or A-Q suited.

However, some factors were working against me. This particular opponent had close to 30,000 in chips, so losing 12,000 wouldn’t cripple him. Additionally, my opponent was in middle position, so his range wasn’t as wide as a late-position player’s range. Also, since I was in the hijack position, there were four players behind me who could wake up with a hand. Finally, I would have preferred my hand to be suited.

Nevertheless, there was a high likelihood that my opponent would fold most of his range, and if he called, my hand would match up OK against A-K or A-Q, a large portion of his calling range. Given the potential 33 percent increase to my stack, I reraised to 7,000, clearly committed, and my opponent pushed me all in with A-A. To win a tournament, sometimes you need to get lucky, and my 9-8 made a straight, doubling me up.

However, a reraise in this situation was quite risky, because I had to call if my opponent put me all in, due to the pot odds. In this particular situation, I believed that my opponent’s range was quite wide and that I would be able to get him to fold a great majority of the time. I reraised to $32,000, and my opponent folded.

Hand No. 607
We were at the final table, and it was sixhanded. The blinds were 40,000-80,000 with 10,000 antes. I was sitting on 2.4 million, the under-the-gun player had 2.6 million, and the player on his left had 1.4 million. The under-the-gun player raised to 240,000, the next player called, and it was up to me in the small blind. I knew that the caller was not capable of calling as a slow-play with a premium hand, and I was fairly confident that he would fold to any reraise. If I could get past the initial raiser, I could pick up a pot of 660,000, adding about 25 percent to my stack. In this situation, my reraising range was pretty wide, but my decision was an easy one, as I was dealt A-Q. I reraised to 1 million, and took down a nice pot.

Note that in some of these hands, I look like a donkey when called. I was risking my tournament life in return for being able to increase my stack 15 percent-35 percent. As the 9-8 hand demonstrated, sometimes you will get lucky and be able to double up. One counterargument to these loose-aggressive plays is that you sometimes have plenty of time to wait for a better hand. That is true, but if you never make these types of plays, you probably won’t get paid off very much when you do get a premium hand.

Bluffing in the WSOP Main Event Part I