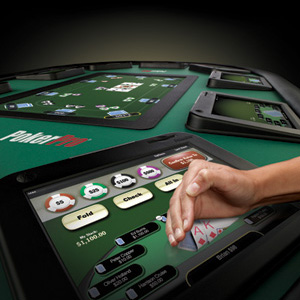 Now let’s take a look at the game from PokerTek’s perspective.

There are two main things that drive casino investment in new gaming technology:

The first thing that the electronic poker table has accomplished is to make it far more palatable for casinos to operate a poker room by offering operating efficiencies. According to PokerTek, whereas a 15-table manual room (using a live dealer, real chips, and cards) requires 50-60 employees to operate, a 15-table PokerPro room requires only 12-15 employees. I am told that the 12-table room at Excalibur operates with 14.

Thus far, PokerTek’s biggest successes have been in opening fully automated (electronic table-only) poker rooms. The company has done so in brand-new casinos such as the Native American-owned Four Winds in Michigan; casinos that previously did not offer poker, such as the Trump Plaza in Atlantic City and the Ameristar Casino in Council Bluffs, Iowa; and cardrooms catering primarily to small-stakes gamblers, where it would be far more palatable for the casino to operate with electronic tables, such as cruise ships with a single poker table in their casino, or the poker room at Excalibur, where the PokerPro is currently in field testing.

So that’s the main value proposition for the casino at the start. But what can the table do to drive consumer demand?

Well, the main value proposition for the gambler lies in the ability of the casino to deliver smaller and smaller games profitably. This enables players to play longer on the same dime, while at the same time enabling the casino to market to a broader audience – namely, casual players who aren’t already playing poker in the cardrooms but would play for smaller stakes than $1-$2 no-limit.

So, the main function of electronic poker tables thus far in the larger cardrooms, such as the Crown Casino in Melbourne, Australia, has been to deliver smaller no-limit hold’em games than they offer on their manual tables. And these are not just smaller cash games, but also sit-and-gos and multitable tournaments.

But here’s the problem: This means that the primary market for electronic poker tables thus far has been limited mostly to people who aren’t already playing poker in live cardrooms.

This brings us to PLO.

What we have with PLO is a game that people presumably would play if they could afford to play (and knew how), and that only an electronic table can effectively deliver (that is to say, without bastardizing the game) at $1-$2 blinds and smaller. And better yet, this is a game with which PokerTek can capitalize on that competitive advantage and tap into a rather large existing player pool – namely, the $1-$2 no-limit and $2-$5 no-limit players who already frequent the brick-and-mortar joints.

Ultimately, the goal is to get to the point where anybody who comes to Las Vegas can find a PLO game at stakes that he is comfortable playing on a daily basis. And the first thing that needs to happen in order for PLO to get bigger is that the games need to get smaller. I’ll discuss structuring sustainable small-stakes games (such as the $1-$2 blinds game with a $5 bring-in and $500 maximum buy-in that has run in St. Louis every day since June) in the next issue.

But if PLO is going to be the “game of the future,” it needs to reach the mass market – the $1-$2 no-limit players – which will require the use of electronic tables. And with regard to the electronic table, I believe we will eventually have a small-stakes game going on a daily basis. However, it probably won’t happen at Excalibur until the game takes off elsewhere on the Strip, for the simple reason that the game needs access to the player pool that the Excalibur currently doesn’t have.

If electronic tables were in place at the MGM Grand, for example, the 50¢-$1 PLO game would have direct access to the $1-$2 and $2-$5 no-limit players needed to play the game. My guess is that the game would run itself without any need for organization at Bellagio, although I am somewhat doubtful that the poker room at Bellagio would be among the first to go in that direction, if at all. However, I do think The Venetian is a strong possibility once the PokerPro field trial is completed; I heard Kathy Raymond (director of poker operations at The Venetian) speak at a seminar during G2E, and she seemed open to the idea of having electronic tables.

Either way, the bottom line is that it appears more and more likely that PLO is in fact the game of the future, and the ability of electronic tables to effectively deal $1-$2, 50¢-$1, and 25-50¢ blinds PLO games will go a long way toward that happening.

Create your own review
Average rating:   1 reviews
LJ Mangold
by LJ Mangold
May be the way to go due to COVID 19.

Very interesting article. I've played poker on a PokerTek table on a cruise ship. It was a great experience. Love to play PLO, but probably wouldn't get involved in games with blinds lower than 1/2. I would probably play more poker if there were more automated tables, which can be used for tournaments as well as cash/ring games.

PokerTek, Excalibur, and the PLO Revolution

Pot-Limit Omaha: The Future is Near

Why Pot-Limit Omaha Games Must Get Smaller