Americas Cardroom has brought the excitement of online poker back to the USA!

Americas Cardroom has grown rapidly over the past several years, as one of the best online poker sites US players can visit, bringing players back to the glory days of online poker in the US through unique incentives and promotions. They are the only US facing site to offer The Million Dollar Sunday $1,000,000 GTD poker tournaments while hosting a weekly progressive rake race for both cash game and Sit & Go players.

Americas Cardroom is truly living up to its name as being the online poker site that US players can trust. As the flagship skin of the Winning Poker Network, Americas Cardroom has already grown into one of the top communities for US poker players thanks to its no-nonsense deposits, quick payouts and high tournament guarantees.

US players can join Americas Cardroom and play against thousands of others for real money!

Jackpot Poker-Americas Cardroom is part of the only US facing network to offer these exciting 3-person hyper turbos Sit & Go’s where players can hit it big for a small investment. The tourneys are available in Texas Hold’em and Pot Limit Omaha formats and players can enter for $2 (play for up to $5,000), $10 (play for up to $25,000) or $40 (play for up to $100,000). The prize pool is randomly drawn right before the start of the tournament.

The Beast-This unique weekly rake race awards cash prizes and tournament tickets to cash game grinders every week. This extra incentive is over and above ACR’s lucrative VIP program and is of absolutely no cost to the player. A portion of the rake is funneled to a cash leaderboard. The more hands a player plays, the higher they rank on the leaderboard and the more cash they make at the end of the race. To date, The Beast has awarded over $6.7 million in cash and tournament entries to players on the network.

The Cage-This nosebleed cash game in a time based tournament format is the first of its kind. Players may buy-in directly or qualify via satellites for this 5 hour long $1,050+$50 buy-in event. The blinds increase each hour of this “Must Play Event”. Whatever chips the player has at the end of the 5 hours is converted to cold hard cash!

Spin to Get IN-Americas Cardroom is one of the few sites offering re-entry technology for which a player can buy-in again upon elimination to any of its tournaments while the tourney is still in late registration. Players can now also Spin to Get IN. Upon elimination, players can spin a slot machine and get right back into any one of the tournaments for as little as one penny. Thousands of dollars in entries have been won so far! 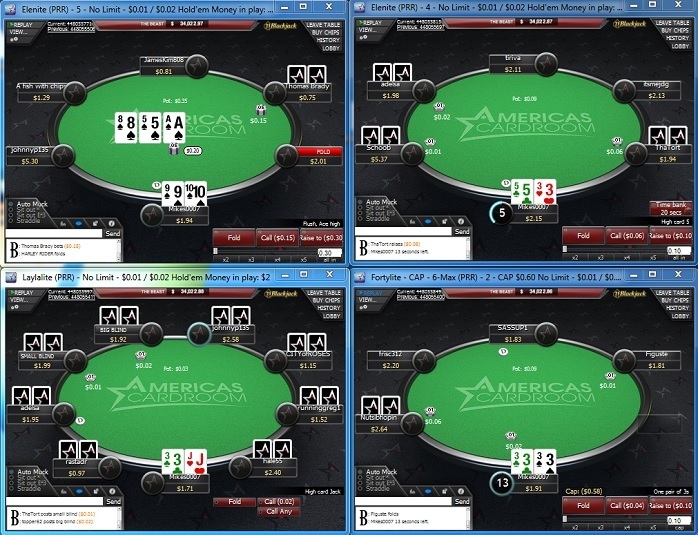 The Winning Poker Network recently upgraded their software which has given the network and ACR a huge boost. The software is very user friendly and allows for easy multi-tabling options, clean graphics, and smooth gameplay.

The upgrade introduced more tournament varieties, such as hand based and time based tournaments, re-entry tournaments as well as bigger promotion options such as The Beast, Sit & Crush and the Elite Benefits program. The software allows players to easily navigate between tournaments and cash games, and filter their preferred playing size and limit, and game selection.

In early April they introduced a new Tournament User Interface. Players now receive their MTT winnings instantly with their Progressive Payout technology. As soon as the money bubble bursts, players are paid progressively into their account without having to wait until they are eliminated or win the tournament.

Initial Deposit Bonus: 100% up to $1000. This is just part of the Welcome Package that includes Access to $250 New Depositors Freeroll + $50 Free Tourney Bucks.

Rakeback Players: 27% Rakeback. The Rakeback reporting tool is located in the “Rewards” tab within the Poker Lobby. The Rakeback percentage is based on the net rake generated from Monday to Sunday.

ACR’s loyalty program is simple. The second players start to play for real money on Americas Cardroom, they will automatically become a part of the program. The ultimate goal is to keep improving their rank in the program. There are five ranks—Lieutenant, Captain, Major, Colonel, and General. To players benefit, ACR uses the dealt rake method to calculate rewards, so earning points and improving ranks is easy.

Earning Points: When players play in a cash game with a qualified rake or in a tournament where a fee is paid, they will earn Rank Points (RPs) which determines their rank.

• In cash games, RPs are given out at a rate of 5.5 RPs for every dollar raked.

Players will also earn Combat Points (CPs) alongside the Rank Points. The number of Combat Points earned each month depends on the rank. A special Player Point multiplier is set for each military rank, the more a person plays – the more they win!

Combat Points are spendable currency at the ACR store. Combat points can be used to purchase cash bonuses, electronics, clothing and even a car!

Note: Rakeback players cannot participate in the Elite Benefits program, but are allowed a one-time switch.

Additional details: Multi-tabling: 20 Tables at a time and compatible with HEM and PT4.

• Instadebit
• Bitcoin
• Neteller
• Skrill
• Person to Person Transaction (Fees for Deposits over $300 via WU are covered and fees for deposits over $100 via MG are covered.
• Credit Cards

Americas Cardroom truly is one of the best online poker sites US residents can sign up at. Try ACR now and receive $1,000 free!

Americas Cardroom’s OSS Cub3D is back April 9th with $5.7 Million in Prize Money