PokerStars is the largest online poker site. Not only does this mean there are more players playing at PokerStars, but it also means that they offer more tournaments each day, week and month.

This, of course, means that there is a much larger selection of micro and low buy-in for players who endeavor to increase their bankrolls and skills. Certainly, the play at these levels are nowhere near that of the higher events offered at PokerStars like the weekly Sunday Million or the Super Tuesday, but it is a great primer for increasing your skills, especially if you are looking to move up in buy-ins and prizepools. For those players who just like to play, but don’t want to spend too much of their bankroll, PokerStars offers a huge selection of weekly events.

PokerStars guarantees seldom offer overlays. Those that do usually are the result of other things going on. A perfect example is the fall-off of traffic due to events like the World Series of Poker. With the amount of traffic at PokerStars, most tournaments shatter their guarantees, especially at these buy-ins.

PokerStars runs two freezeout tournaments with big prizepools. These are the largest non-rebuys within the scope of micro and low buy-in tournaments:

The Sunday 1/4 Million costs $10+$1. This tournament generates the largest weekly player field anywhere. Expect fields as large as 30-35,000 players weekly. This tournament is a crapshoot. Some call it bingo or a slot tournament. You’ll need good cards, but you’ll need incredible luck too.

The Daily Forty Grand also costs $10+$1. For those players who like big money freezeouts, this is a great primer for bigger tournaments. It is also a good training ground for improving your skills.

As you can see from the following chart, PokerStars offers a lot of freezeouts. One of the complaints at PokerStars is that the fields are so huge. As can be seen, most of the freezeouts ran daily do have caps on them. 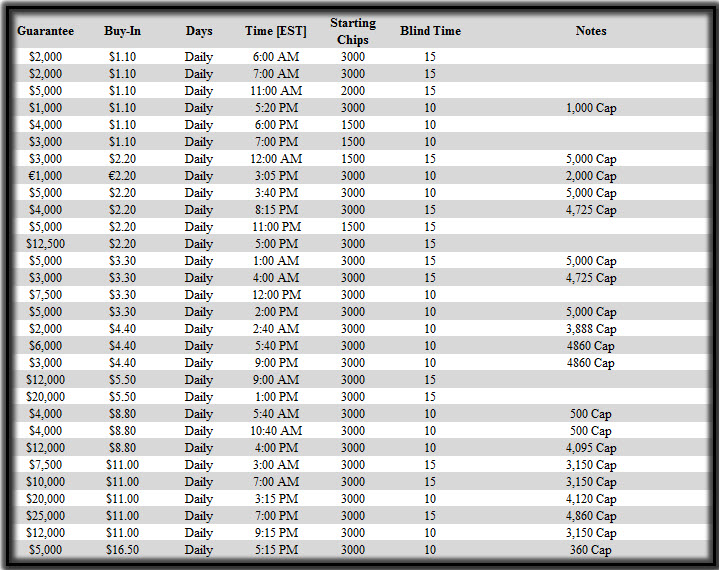 PokerStars has some very good and lucrative rebuys. You can find online pros consistently playing these tournaments. For instance, the 2:15PM EST $60,000 Guarantee $3.30 tournament is replete with very good players who earn their living playing these smaller buy-in big prizepool tournaments as well as top online pros who round out their daily play schedule. Although they have a lot of very good players, there are also a lot of bad players looking to score a big win. If you like rebuys, you won’t find better and bigger prizepools anywhere.

Pressed for time? Got the skills to take advantage of weaker players in turbos? Maybe you just like your tournaments fast and furious. Whatever your reason for playing turbos are, you’ll find more turbos at PokerStars than anywhere else. PokerStars offers a large variety also. As you can see from the following chart, all of the standard turbos run 5-minute blinds. Starting chips range from 1500 to 3000. Some are capped tournaments, while others have no cap. The daily $7,000 Guarantee only pays the final table. As you can see, a lot of variety!

PokerStars also spreads four turbo rebuys for micro and low buy-in players each day. Survive the first hour rebuy period and you can add-on an extra 5,000 chips. As in every tournament, late rebuys and add-ons are not as lucrative as making earlier rebuys. This problem is accelerated in turbos as each of these turbo rebuys will only offer 12.5BBs starting the second hour. However, if you’re a decent turbo player, added chips could make the difference between busting and still having chips to play with.

PokerStars runs four 8-Max tournaments each day. These are a bit like 9-Max tables, but obviously with one fewer player. Although there maybe one fewer player, that one player difference needs to be taken into consideration. Whether it means tables breaking differently or knowing that you can push that preflop raise with garbage past fewer players, there are small subtle differences.

This tournament’s blinds never increase. Instead, the antes, which start on hand one, increase at each 10-minute increment. Players need to play less than good hands simply because they are putting part of their stack in every hand instead of while in the blinds. This makes the tournament much like a turbo, because the amount of chips required to play an orbit belies the 10 minute blind structure.

Players start this tournament with 5,000 chips and 30 minute blinds. Although there is a cap on 2,535 players, this tournament usually won’t go that high. Players should be warned that this tournament is an all-day affair with the final table reached in 12-14 hours. Be patient! With 30 minute blinds you have more than enough time to play good poker and wait on your hands. Keep this in mind: If you didn’t play a single hand in the first hour, you would start the second hour with over 90BBs! Finally, you will run into a lot of players who joined the tournament without really paying attention to the structure or chip stacks. Starting in the 2nd or 3rd hour you’ll be sitting with people bent on either busting or doubling because they find themselves stuck in a tournament that will take too long for their time constraints. Wait for a big hand to take their chips. Once again, if you can’t spend 12-14 hours to play this, skip this for something shorter.

PokerStars offers so much in guarantees for low buy-in players, that it is no wonder that players flock to play their micro and low buy-in tournaments every day. Although the player fields tend to be the largest online, the huge prizepools and the opportunity to play at any time during the day or night and hone your tournament skills is unsurpassed.

Good luck at the tables!

Small Buy-in Tournaments on the Internet