PokerStars has long been known as the place to play when you are serious about tournament poker and cash game play. Many players have been attracted to PokerStars due to the success of the 2003, 2004 and 2005 World Series of Poker Main Event Champions, the first two of which qualified through PokerStars. As the largest poker site, PokerStars has a large variety of games to play, and a large player base to guarantee around the clock competition.

PokerStars has decent traffic at the non-hold’em games, allowing their players either a change of pace from hold’em or a home to play those games they enjoy.

PokerStars has a very extensive selection of Sit and Go tournaments [SnGs]. They run the gamut from $5500+$100 to $0.10 buy-ins. There are also 500 and 1500 Frequent Player Point [FPP] SnGs. They offer SnG qualifiers to the weekly $1M Guaranteed tournament available in both real money and FPP buy-ins. Their SnGs also range from 2-player heads-up games to massive 360-person games.

PokerStars is well-known for it’s multiple table tournaments which run 24 hours per day and have freerolls as well as buy-ins suiting all levels of play and comfort. 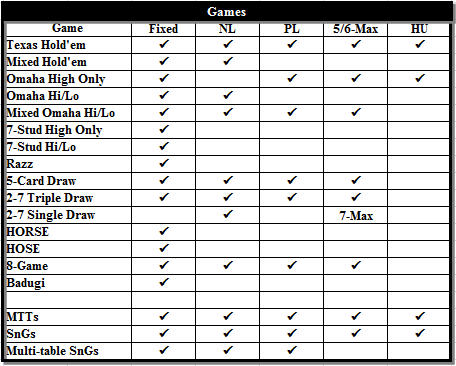