It is that time of the year again. After a highly successful Season 6, the European Poker Tour is launching the much anticipated Season 7. Although at press-time all the events and specifics are not nailed down, it looks like the new Season 7 will include 13 events! From London to Berlin to the PokerStars Caribbean Adventure, players will be able to find an event in the destination of their choice.

The European Poker Tour satellites are being run in Euro currency only. Players will need to set up a Euro account through PokerStars in order to play in these satellites [as well as any other non-satellite games and tournaments they offer in Euros]. Part of the reason they decided to do this was because many players were getting really hurt by the conversion fees that PokerStars had to charge last year during the EPT’s Season 6.

The following information has the breakdown of tournaments available, as well as the ways you can satellite into these prestigious and lucrative events. 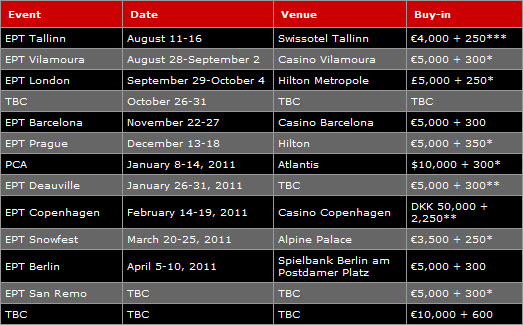 As you can see, there are stops all around Europe [and the Caribbean]. The first two events, the EPT Talinn and EPT Vilamoura, are around the corner and their satellites are running as you read this! So how do you qualify? Make sure you have a Euro account and sit down and play. Alternatively, you could try for a seat cashing in FPPs. Click a tab to see what the average satellite selections are.

FPP Satellites
Players can use their earned FPPs to satellite into a European Poker Tour Season 7 seat. You may buy-in directly for 10,000 FPPs [where one seat is guaranteed] or play sub-satellites for as little as 50 FPPs and win your way up the ranks to a seat. As always, the choice is yours.

Cash Satellites
Buy in directly for €530 on select Qualifier tournaments [where 3 seats are guaranteed]. As with all satellites, there are many sub-satellites and super satellites offered daily. Players can qualify for a seat for as little as €5.45

Steps and SnG Satellites
Players can ascend the Steps satellites for as little as €2.20. Players can even win their way into the €2.20 Step A for 15 FPPs! At each stage you can receive a ticket to the next step, the same step and in some instances a lesser step along the way. Step G is €2100 and awards 2-3 packages to the winners, which is based on package amounts.
As you can see, PokerStars has many avenues for attaining your dream to attend and play in one of this season’s top EPT events. What are you waiting for?

Best Odds to Win a 2010 World Series of Poker Seat