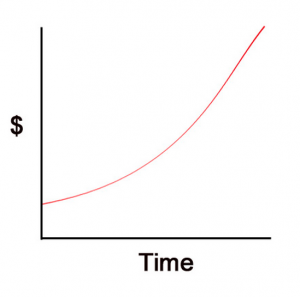 Zoom in Zoom out….I recently tried out that Google earth thing. In case you don’t know what it is, it’s a piece of software that you can download that lets you look at any place on earth from any height using satellite images. Its actually really impressive and lots of fun. I found it incredible to look at England from space then zooming in bit by bit… I was finally looking at a close up image of my street. It reminded me why I like statistics so much. Perspective. Statistics allows us to zoom in and zoom out on things. I’ll show you what I mean by looking at limit holdem earn rates.

In last month’s article I discussed what it means to assume that poker earn rate is normally distributed. I will be using that assumption as the basis for calculating the figures used in this article.

1) Winnie the Winner and Larry the Loser

I would like to introduce you to two of my imaginary friends. They both play a lot of limit hold’em and remarkably I know that their earn rates are indeed normally distributed.

2) The Very Next Hand

Statistical investigations are only meaningful when you have lots and lots of data. But let’s look up really closely at the very next hand.

Since we know nothing about the hand the only thing we can say is “we expect Winnie to win 0.02 big bets per hand and Larry to lose 0.01 big bets per hand”. We can also assume that since Winnie is a long term winning player she is playing good poker and sees about 25% of flops. So she earns nothing 75% of the time and 0.08 big bets per hand for the other 25%. We could not make similar assumptions about Larry.

We could also make other observations as we zoom out slightly. If we know the players’ positions then for Winnie it would be higher the closer she was to the button and we could probably define this increment if we had enough data. Larry would probably lose uniformly from all positions.

If we knew which hand the player held we could better predict the value of the next hand. Both players would probably have similar earn rates for pockets aces (something in the region of 3 big bets). Whilst Larry would get more action Winnie would know when to fold or stop raising. On most hands Winnie would be expecting to lose slightly less than cost of paying for them when she gets them in the blinds. Larry’s expected value for most hands will be negative and would only be positive for the very best starting hands.

Since know the earn rate distributions let’s see what we can expect over the next hundred hands:

Winnie can expect over the next 100 hands to:

Larry can expect over the next 100 hands to:

Larry’s earn rate has a higher standard deviation than Winnie’s. Look how more frequently he has extreme short term results.

We can also create a new distribution out of the two we have.

To summarise from above:

Therefore we can say that the amount that Winnie earns more than Larry over the next 100 hands is Normally distributed with mean 3.

The standard deviation from adding two Normal distributions is not as easy to get as the mean… but it’s not rocket science either… we square the two standard deviations and then …. add them …and then square root the answer…. Easy huh?

So over the next 100 hands Winnie can expect to win more than Larry only 54% of the time!

Let’s zoom out a little further.

Winnie can expect over the next 200 hands to:

Larry can expect over the next 200 hands to:

Over the next 200 hands Winnie can expect to win more than Larry only 55% of the time!

Winnie can expect over the next 2,000 hands to:

As we move further away from a few hands earn rate begins to dominate over standard deviation. Extreme outcomes become less and less likely, especially for Winnie who has a lower standard deviation. By the time we get to 2,000 hands extreme results are becoming outrageously unlikely. Our long term winning player is much more likely to be in profit that our long term loser.

Over the next 2,000 hands Winnie can expect to win more than Larry only 66% of the time!

I chose the extreme amounts to look at as 15 times the amount Winnie expected to earn. You can use any number you want when looking at the extremes. I just chose 15 because it seemed pretty extreme to me.

Let’s zoom right out and look at some of the key results.

It’s obviously not exactly 100% but it’s so close I couldn’t get excel to show me where the decimals start running.

You will always hear expert poker players emphasising the “long term”. There is good reason for this. Poker is fundamentally a game of striving to do the right thing whilst ignoring short term results. In order to really succeed in poker you have to really believe that things will work out in the long run.

Whilst writing this article I have had a terrible downswing badly deepened by tilt. Working out these numbers made me realise something important. Bad players, most specifically maniacs, have extreme short term results. You are more likely to see a terrible player leave the table with more than 60 big bets after 100 hands than you are to see a good player do so.

Don’t be seduced by this. Don’t get gambling fever. By the time we get to the long term all the losers will be losers and all the winners will have won. See you there 😉

Calculating the Probability of Losing your Bankroll in Texas Holdem

Who is the Most Confident?