Americas Cardroom’s OSS Cub3D is back April 9th with $5.7 Million in Prize Money 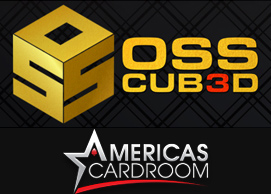 Get ready to feel like you’re holding trip kings. Americas Cardroom today confirmed that its highly successful OSS Cub3d series is returning to the US-facing online poker site from April 9th through May 7th. The series features $5.7 million in guaranteed prize pools after $4.5 million in the inaugural event last summer.

“We’re redefining massive over and over and over again,” stated Michael Harris, spokesperson for Americas Cardroom. “We expect this year’s OSS Cub3d to shatter records after paying out $6.5 million last time around.”

Throughout the series, players can find tournaments that fit their bankroll. The MOSS features buy-ins as low as $0.06, and the BOSS, built for high rollers, sees buy-ins climb as high as $5,100.

The OSS Cub3d is designed for tournament players, but fans of SnGs have something to get excited about as well. Americas Cardroom recently launched Sit & Go 2.0, a groundbreaking new take on Sit & Go games that includes a progressive jackpot component.

Full details on the OSS Cub3d, including the schedule, can be found at AmericasCardroom.eu.